There are presented collection of publications for media outlets and journalism universities for gender mainstreaming.

Reporting on Violence against Women and Girls

JourJournalism serving the public interest is an essential lever in the fight against violence against women and girls (VAWG). While coverage has improved over the past few years in many parts of the world, current reporting on gender-based violence still far from accurately depicts the extent and depth of what may be described as a global but silent epidemic.

Far too often, violence against women and girls, if at all reported, is relegated to the sidelines or circumscribed as a “family affair”, as a “personal problem”, or framed in a sensationalist way that does not seize the gravity of, nor accurately depicts, the situation as a high-risk issue of public interest.

Unique in its kind, the handbook is an informative and practical resource for media professionals on how to report on gender-based violence. In addition to its accessible format, it is structured to facilitate its use in fully busy news desks with tight deadlines in sight. Divided into two main chapters, the handbook features specific information on 10 selected topics relative to VAWG, and offers general recommendations for ethical journalistic practice in reporting on gender-based violence.

It gives media professionals some recommendations and examples of good practice. The handbook also intends to help journalists better tackle the dilemmas they face when reporting on those gender-specific matters.

Each thematic sub-chapter includes the sections Definition, Facts and figures, Explanations and background, as well as Advice and good practices on how to cover the topic. It also contains a Glossary with main notions, and a list for useful Resources with regard to the subject matter. Adopting a global scope, the handbook demonstrates how each of these types of violence occurs as much in developing as in developed countries, and therefore concerns us all.

The second chapter provides general recommendations on how to address, frame and cover stories on violence against women and girls. It provides practical advice on key steps in the reporting and editing process, such as assuring the sense of dignity, safety and trust with interviewees, informed consent, responsive listening, choice of location, cultural sensitivity, choice of interpreter, interviewing children, choice of images and so forth.

A final section contains a list of International Declarations, Resolutions and Conventions.

Model curricula for journalism education: a compendium of new syllabi 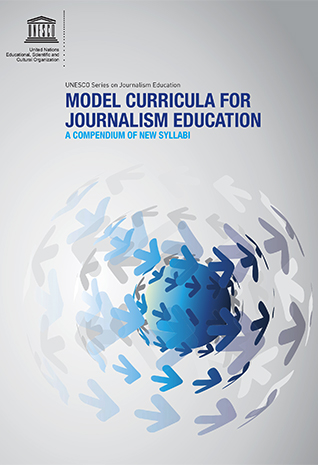 This publication builds on the original UNESCO Model Curricula developed in 2007 and adapted, since then, in over 60 countries. The ten new specialized syllabi on journalism education fill the gap for specialized literacies required by journalism educators to respond to new challenges. Such specialized journalistic literacies include those relating to media sustainability, data mining, intercultural dialogue, global communication, humanitarian crisis, human trafficking, community participation, science and bioethics, as well as gender inequality.

Whereas the original Model Curricula focused on developing countries and emerging democracies, these new syllabi are relevant to all democratic societies in which journalism education is an important part of national efforts at promoting free, independent and pluralistic media development. An added value of these new syllabi consists in the use of globally inclusive sources of references, increased focus on online resources and gender-sensitivity.

This compendium of new syllabi represents UNESCO’s strategic response to the question: How can journalism education continue to renew itself? These questions are framed in an increasingly complex social, political and economic context. In the aftermath of the 2008 global economic and financial crisis, journalism faced its most trying moment, especially in the developed world. And so did journalism education, posing challenges for the future.

The development of the UNESCO Model Curricula is an attempt by UNESCO to set standards based on good practice internationally. The effort derives from a conviction that professional journalistic standards are essential to a media system that can foster democracy, dialogue and development. By improving the quality of journalism education, UNESCO believes that both journalism educators and students stand a better chance of influencing journalistic production at the news-institutional level. In turn, newsrooms that are staffed by well-trained and critically minded journalists are likely to positively influence the processes of democracy and development in their societies, especially in the developing world. A quality journalism education is a guarantor not only of democracy and development, but also of press freedom itself.

UNESCO’s support for journalism education is underpinned by a strong conviction that professional journalistic standards are essential to bring out the potential of media systems to foster democracy, dialogue, sustainable development and gender equality.

The model curricula in this handbook are designed to be used as an entire course, or can be used in bespoke ways to suit the media landscape and the needs of journalism students at the local level. They have been developed by experts who are at the cutting edge of journalism education and are presented in a variety of formats and languages.

Additional materials on Gender and Media

THE BIG CONVERSATION: Handbook to Address Violence against Women in and through the Media

UN Women and UNESCO are pleased to have collaborated on the production of this handbook, which is one in a series of handbooks being developed to advance implementation of A Framework to Underpin Action to Prevent Violence against Women (UN Women, UNDP, UNESCO, UNFPA, OHCHR and WHO, 2015). This handbook provides guidance, tools and promising practices from countries across the globe for those working with and within media. It is our intention that this handbook provides entry points for accelerating progress towards gender equality in the systems and structures of organizations. We hope that it leverages what we know works in order to promote the values of diversity, equality and non-violence in the content that media produces.